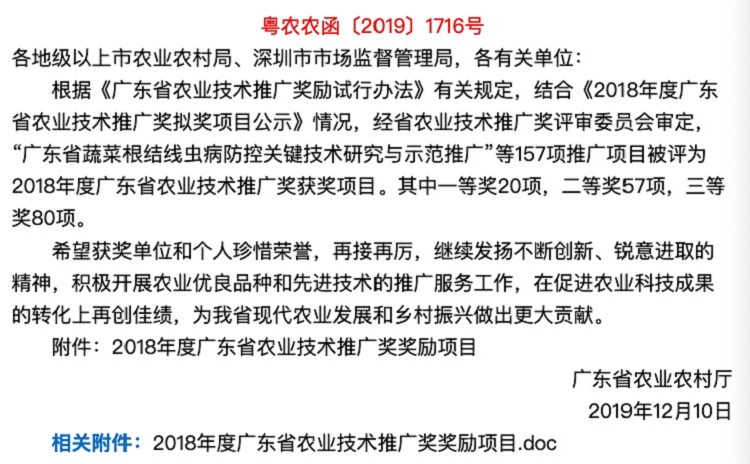 The result of the promotion and application of ecological prevention and control technology for tea plant diseases and insect pests is based on the occurrence of major plant diseases and insect pests in different tea areas in Guangdong, combined with the characteristics of the local environment and tea tree species, a comprehensive technical system for targeted pest control, which is based on the overall biology and environment From a viewpoint, based on the guiding ideology of prevention and the principles of safety, economy, effectiveness, and applicability, based on agricultural prevention and control, adapting to local conditions and time, rationally using biological, physical, and mechanical methods, combined with other effective ecological Measures to control the population density of tea tree diseases and insect pests below the level of economic loss, and reduce the harmful side effects of the ecosystem to a minimum, in order to achieve the purpose of protecting the environment, protecting human and animal safety, and ensuring the high yield and quality of tea trees. The promotion and application of this result is in line with the national rural revitalization strategy and the policy of fighting poverty. It is an important measure to achieve the green rise and green revitalization of tea. hand.

The results were promoted and applied in tea gardens such as Qingyuan City, Shaoguan City, Heyuan City, Meizhou City, Chaozhou City, and Jiangmen City in Guangdong's main tea-producing areas, and achieved ideal results and reduced The impact of conventional biological control on natural enemies, protecting natural enemies to the greatest extent, optimizing the tea garden ecosystem, and protecting the tea garden environment; overall improving the quality and safety level of tea products in our province, and reducing the concerns of tea producers and consumers about tea pesticide residues , Increase the enthusiasm of producers and consumers' consumption, so as to promote the healthy development of the tea industry as a whole.